Nissan South Africa has issued a safety recall on several local models due to a defect with the front Takata airbag inflators. This affects both the driver and passenger airbags.

Nissan has been advertising their recall over social media and in local newspapers. The automaker said that customer safety has always been their first priority. As a result, they are replacing airbags in Nissan vehicles built between 2001 and 2013 at no extra cost.

Moreover, Nissan SA has given this link to check whether your vehicle is affected. Simply enter your VIN number or alternatively you could make a stop at any of the Nissan dealerships.

These 8 Nissan models built between 2001 and 2013 and the ones being recalled: 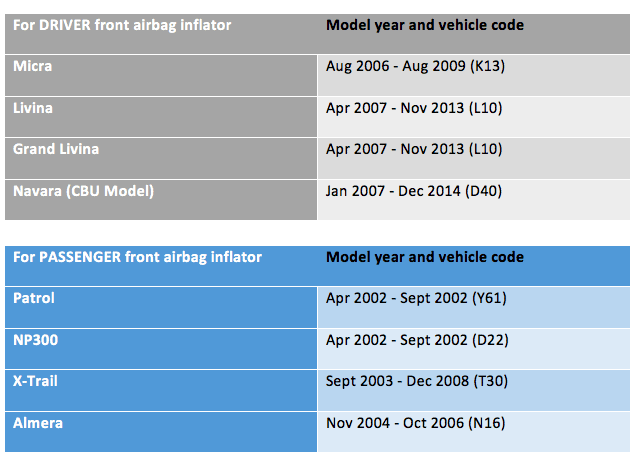 More recently, in March, Mazda SA recalled an estimated 28,000 models also for defective Takata airbags. Models recalled were the Mazda2, Mazda6 and RX-8 cars that were built between 2002 and 2014.

Owners are urged to have your vehicles checked at your nearest dealership where the airbags will be replaced. Should the airbags deploy, it could cause serious injuries or worse.